In fiscal year 2020, both the retail sector and the apparel industry were severely impacted by the COVID‑19 pandemic. Widespread temporary store closures in light of global lockdowns, large-scale restrictions on public life including extensive social distancing measures, and international travel restrictions put a significant strain on global industry sales. Also the business of HUGO BOSS was severely impacted by the pandemic. After a very encouraging start to the year, the rapid spread of COVID-19 led to a significant impact on the global business of HUGO BOSS. However, towards the middle of the year and following the end of the first lockdowns in many markets, business started to recover strongly. The business recovery, which was particularly noticeable in the third quarter, slowed down in the fourth quarter due to renewed restrictions on public life and the related temporary store closures in many important markets. On average, around 20% of the Company’s own retail stores globally were closed in 2020.

Consequently, Group sales decreased by 31% to EUR 1,946 million in fiscal year 2020, adjusted for currency effects (2019: EUR 2,884 million). In Group currency, sales were down 33%, as currency effects had a slightly negative impact on sales development in the reporting period.

In Europe (including the Middle East and Africa) double-digit sales decreases in all major markets contributed to the overall decline in sales. This primarily reflects temporary store closures in the wake of the lockdowns, which severely weighed on regional sales in 2020. Significantly lower tourist flows in light of international travel restrictions put an additional strain on the sales development. Also in the Americas, the pandemic and the related temporary store closures significantly burdened sales development. In addition, unrest and demonstrations towards the middle of the year negatively impacted business in the U.S. In Asia/Pacific, many markets recorded double-digit sales declines as well. On the other hand, business in mainland China, which is a strategically important market for HUGO BOSS, returned to double-digit growth already in the course of the second quarter, thus offsetting the regional sales decline to some extent. Earnings Development, Sales and Earnings Development of the Business Segments

Sales in the Group’s own retail business (including freestanding retail stores, shop-in-shops, outlets and online stores) declined by 30% in fiscal year 2020, adjusted for currency effects. On a comp store basis (i.e. taking into account all retail spaces opened or taken over before December 31, 2018 and excluding stores renovated in 2019 or 2020), currency-adjusted own retail sales came in 32% below the prior-year level. This is mainly attributable to temporary store closures in the wake of the pandemic, which significantly burdened sales development in brick-and-mortar retail in 2020. On the other hand, the Group’s own online business, which includes the own online store hugoboss.com as well as self-managed offerings on important partner websites (concession model), was able to accelerate further in fiscal year 2020, posting significant double-digit growth for the third consecutive year. Overall, own online sale were up 49% on the prior-year level, totaling EUR 221 million in 2020 (2019: EUR 151 million). This performance is based on a strong improvement in traffic and conversion rates. In addition, the successful roll-out of hugoboss.com to 32 additional markets contributed to the sales increase. The share of own online sales in Group sales increased to 11% in fiscal year 2020 (2019: 5%). Overall, the share of the Company’s own retail business in Group sales remained virtually unchanged at 66% (2019: 65%).

In its wholesale business, HUGO BOSS recorded a currency-adjusted sales decline of 34% in 2020. A generally cautious order behavior in the wake of the pandemic led to lower deliveries to partners, particularly in Europe and in the U.S. market. Besides that, the expansion of the online concession business in 2019 led to a shift in sales from wholesale to own retail. Following a change in the basis of consolidation, the sales of six stores in the United Arab Emirates are also attributed to retail sales starting in January 1, 2020. Compared with the prior year, this also led to a slight shift in sales from wholesale to own retail. Consequently, the share of the Company’s wholesale business in Group sales declined slightly from 32% to 31% in 2020.

The economic consequences of the pandemic also weighed on sales in the license business. In particular, a decline in sales generated with fragrances, watches, and eyewear, reflecting a softer travel retail business, weighed on the performance. The share of the license business in Group sales remained stable at 3% compared to the prior year.

The negative implications of the pandemic weighed on sales of both brands in fiscal year 2020. While BOSS recorded low to mid-double-digit percentage declines in sales across all wearing occasions, the decline in casual- and athleisurewear was less pronounced than in formalwear. Also for HUGO, casualwear proved to be more robust than formalwear.

In fiscal year 2020, both menswear and womenswear recorded double-digit sales declines. A clear trend in favor of casual- and athleisurewear was also visible here.

Network of own retail stores

In fiscal year 2020, the number of own freestanding retail stores increased by a net figure of 14 to 445 (2019: 431). 2020 saw the opening of 24 BOSS stores, mainly in Asia and Europe, as well as one HUGO store in Moscow. In addition, five BOSS stores and one HUGO store in the United Arab Emirates were added to the Group’s own store network following a change in the basis of consolidation. On the other hand, 17 stores were closed globally in light of expiring leases.

Including shop-in-shops and outlets, the total number of retail stores operated by HUGO BOSS globally increased slightly as of December 31, 2020 to 1,157 (2019: 1,113). Besides the higher number of freestanding retail stores, this development also reflects a slight increase in the number of outlets, mainly in the Asia/Pacific region. The latter is primarily intended to support the Group’s expansion in the strategic growth market of mainland China.

The total selling space of the Group’s own retail business increased 3% and amounted to around 161,000 sqm at the end of the year (December 31, 2019: 156,000 sqm). The slight increase is related to selective new openings in the past fiscal year, including the addition of six new stores in the United Arab Emirates. The decrease in brick-and-mortar sales led to a decline in retail sales productivity to around EUR 6,600 per square meter (2019: EUR 11,100 per sqm). 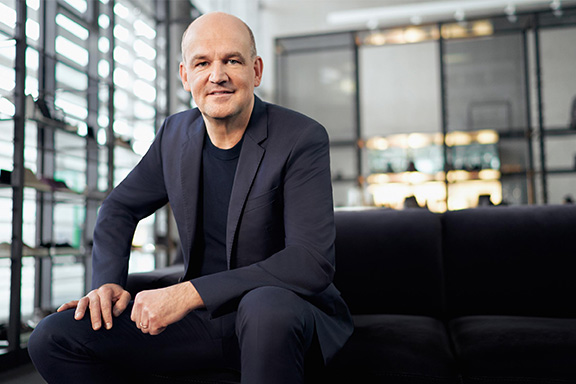 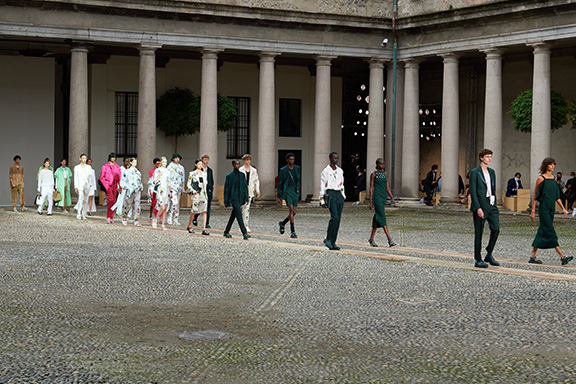